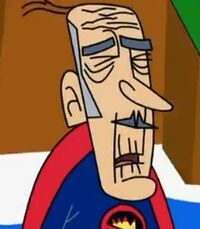 Albert is Mr. Mittens' butler. Albert doesn't seem to have resentment against Johnny, but he was forced into joining the Johnny Stopping Evil Force 5 because he has to take care of Mr. Mittens all the time. He actually hates his job and considered quitting. He's admitted that he's only doing his job because of the benefits.

Retrieved from "https://johnnytest.fandom.com/wiki/Albert?oldid=40341"
Community content is available under CC-BY-SA unless otherwise noted.