Johnny Test Wiki
Register
Don't have an account?
Sign In
Advertisement
in: Members of the Johnny Saving 6, Characters, Villains,
and 7 more

Eugene "Bling-Bling Boy" Hamilton is a recurring anti hero in the series who has a one-sided crush on Susan.

Bling-Bling is a gluttonous, out of shape pale boy with brown hair and blue eyes (though he once claimed they were hazel) and freckles on his cheeks. He wears an all white outfit consisting of a collared shirt, pants with yellow stripes on the sides and sneakers also with yellow stripes. He wears a gold necklace and knuckles with 3 "B"'s, hence his nickname.

Bling-Bling is usually villainous at times, though he will act friendly towards Johnny, mainly because he sees a bit of himself in the flame-headed boy. To this end, he'll team up with Johnny and his friends to defeat another villain. Although he is well aware Susan doesn't share his romantic feelings (even when she says it to his face that she doesn't like him), he's very persistent and refuses to give up, making all kinds of inventions and schemes to win her over, even going as far as to blackmail her.

Although he wouldn't admit it, he craves human interaction and builds robots to cope with this, which Johnny claims is sad (Johnny's Big Dumb Sisters). 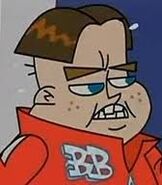