View source
watch 01:36
We're Getting Mutants in the MCU - The Loop
Do you like this video?
Play Sound
Brain Freezer 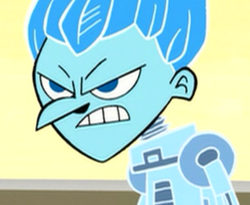 Brain Freezer (voiced by Louis Chirillo in Seasons 1-4, Bill Mondy in Season 5 onwards) is a recurring antagonist and he is the former coffee guy of the Institute of Technology. He uses an ice blaster to freeze things, encasing them in blocks of ice. As of Johnnycicle, he is no longer evil and doesn't freeze Johnny anymore. In Lawn Gone Johnny, he turns evil again for unknown reasons. His real name was never revealed. He first appeared in Johnny vs. Brain Freezer.

When wearing his armor, he has icy blue skin with hair made of ice that stands up behind him, his armor is ice blue as well with buttons of other colors (mostly red), his left arm has a blaster on it as well and he can fly when in his armor. When not wearing his armor earlier, he had pale skin, short messy dark-brown/soft black hair, and blue eyes and is very shy. He always wore dark jeans with a dark purple button-up polo shirt and black tennis shoes or occasionally a white dress shirt with the sleeve pulled up to the elbows and tan dress pants. After Johnny's help, Susan and Mary change his appearance three times, The first being goth style which changed him completely, dying his hair dark blue, putting black makeup on him and piercing his nose and painting his nails navy blue. his outfit was a red t-shirt, a black trench coat, black jeans with two black crossed belts and black combat boots. The second time was when the machine that changed his appearance was fixed to well. He came out with dark tan skin, shiny blond hair and his voice changed slightly. He agreed that they could tone back the machine but he liked this appearance. The third time was the one he kept, he grew taller, more muscular and very attractive much to his joy when he opened a coffee lounge on the Porkbelly Institute of Tech, where a jazz band played and he was constantly surrounded by girls, saying, "there is enough of me and coffee to go around", Johnny and Dukey are seen at a table, Dukey drinking hot coffee and Johnny drinking either iced coffee or a frappuccino.

Frigokinetic Creature Creation: in Johnny X and the Attack of the Snowmen, Brain Freezer was able to create living snowmen. 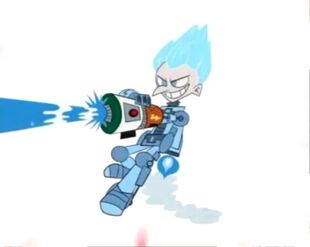 • A character from a Canadian-Australian animated series, "SheZow" (which was released in 2012, which was 6 years later after Johnny Test was released in 2005), named "Cold Finger" gained a similarity to Brain Freezer due to his role being an antagonist who freezes people.