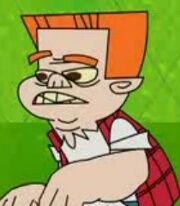 Mitchell "Bumper" Randalls (voiced by Scott McNeil): A local bully who regularly tortures the kids at Johnny's school, though Johnny is his favorite victim; he tortures Johnny more than anyone else. However, he has a sensitive side as in an episode he reveals that he loves roses and even has a rose garden. He has two cats: a white cat called "Cuddles" and an orange tomcat. He also has a lizard named Mr. Muncher and a bulldog. His father seems to want him to be a wrestler, but he just wants to grow flowers so he takes his anger out on Johnny. This leads to why he probably bullies all the time. He first appeared in Johnny Impossible.

He's got orange hair, brown beady eyes, yellow teeth and pale skin. He wears a white shirt under a red tee and a pair of jeans and black tennis shoes.

He is Johnny Test’s bully.

Retrieved from "https://johnnytest.fandom.com/wiki/Bumper_Randalls?oldid=43852"
Community content is available under CC-BY-SA unless otherwise noted.