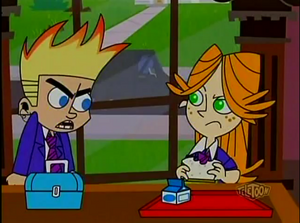 Claire Nefarius is the only daughter and child of Larius Nefarius and a minor antagonist of the series. She only appeared in Quantum of Johnny where she had a birthday party and hid to launch missiles into her father's factory (which was nearby) in order to get her dad to spend more time with her.

In Quantum of Johnny, Johnny constantly mentions that she is hot. At the end of the episode, Larius Nefarius learned of his mistake and promised to spend more time with her and act like a father. He started by forbidding her from dating Johnny because she is too young. She's a former rival of Johnny. She has light orange hair, with green eyes, and freckles.

She was a selfish girl who doesn't care when everyone (who she doesn't like) is talking to her and gets rid of them with her body guards. She has this done to Johnny Test (character) several times.

She always wanted her father to spend some time with her, but he always had to work so she decided to blow up her dad's factory so he can spend time with her.

Soon, when it appeared that their house is nearby the factory, Johnny helped her to stop the missiles and save them. Her personality noticeably improved once she made up with her father, becoming considerably friendlier. She even kissed Johnny on the cheek and wanted to date him but her father stopped this.

Retrieved from "https://johnnytest.fandom.com/wiki/Claire_Nefarius?oldid=37489"
Community content is available under CC-BY-SA unless otherwise noted.