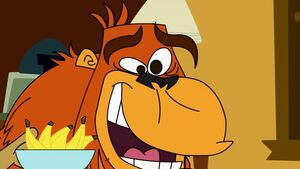 Clyde is Susan and Mary's pet orangutan. He first appeared in Johnny and Clyde.

Since he's an orangutan, he copies everything that people do on TV, which causes a lot of trouble for Johnny and Dukey when he learned how to rob banks from watching TV (which is why Susan and Mary told Johnny NOT to let him watch TV).

The girls were testing him to see if the "Monkey See, Monkey Do" theory was true, though Johnny wanted to watch him. They initially didn't trust him but had no choice since they needed to go see Professor Slopsink: they agreed, though specifically told him not to let Clyde watch TV. Johnny let him anyway, and this greatly influenced Clyde. Soon, Johnny and Dukey chased him into town and witnessed him using the Whoosh Ray he took to blast off the clothes of everyone in the bank and rob it. When the police arrive, Clyde throws a bag of money to Johnny, causing them to assume he and Dukey were helping Clyde. They soon steal an old man's car (Clyde also took his suit), they drive all over Porkbelly until they crash into the mall for ice cream. Johnny soon stopped him by putting the film they saw in reverse and let him watch it, allowing him to reverse everything he did and return the money. Afterwards, Clyde became the city's new chimney sweep, using the Whoosh Ray to clear chimneys.

Retrieved from "https://johnnytest.fandom.com/wiki/Clyde?oldid=33019"
Community content is available under CC-BY-SA unless otherwise noted.