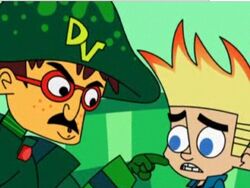 Dark Vegan is an antagonist who first appeared in "Johnny Test in Outer Space".

Dark Vegan is the leader of Vegandon, a fertile utopian planet inhabited by a species called Vegans. He first appeared in "Johnny in Outer Space", in which it is revealed that his method of sustaining the utopia that is Vegandon is to suck the resources of other planets and use them on Vegandon. In "Johnny X: The Final Ending (JX6-b)" he comes back to get revenge on Johnny, but with the help of Johnny and the Johnny Helping Not So Evil Force 5 and Vegan's daughter Jillian, Dukey, Susan, Mary, and the military, Dark Vegan was defeated once again, after which he started living on Earth. He starts to change his mind about Earth after Johnny introduces him to toast, which soon becomes his new favorite food. He had a cameo appearance in "Join The Johnny Scouts" when Johnny wanted to - and succeeds in - selling him Ladybird Scout cookies. Dark Vegan also appeared in "Dark Johnny". He later returned to Vegandon but left the planet and returned to Earth the moment he learned that Vegandon doesn't have toast. He is a parody of Darth Vader from the Star Wars franchise, but his appearance and behavior is similar to Dark Helmet of the movie Spaceballs (who is also a Darth Vader parody).

Retrieved from "https://johnnytest.fandom.com/wiki/Dark_Vegan?oldid=33125"
Community content is available under CC-BY-SA unless otherwise noted.