The episode begins during the morning, on the Clammy Beach, with the Test family parking their car. As they get out of the car, Johnny complains about coming to the beach so earlier, saying that not even the water woke up. His father tells him that, if they want to have a spot on the beach, they must be there earlier, but, before he could finish the sentence, the beach was already full. He than takes a binocular and looks for a free spot, and, as he finds one, sees another man heading for the spot. He than starts running, racing the other man for the spot, and, in order to get the spot, he jumps on it, as the other man does. As he lands though, the other man lands on him, and Hugh tells him that the spot is already taken.

The scene than shows Johnny, diving a few times underwater, while telling Dukey that he has found a can, and that he saw another can there. He than says that, if he could breath underwater, he could collect tons of cans which he'll redeem, and with the money he'd buy his own island. Dukey than breaks the fourth wall and tells the audience that Johnny's dreaming, but Johnny says that a kid with 2 genius sisters can do more than dream. The scene than shows Gil playing volleyball, with Susan and Mary admiring him. As the ball goes close to Susan and Mary, he goes to get it back. As Susan and Mary salute him, he spots a tanned, blonde girl, and starts following her, much to Susan's and Mary's annoyance, who ask what she has and they don't. Johnny than shows up, telling them that she has great looks, perfect tan and white teeth, to which Susan replies that they have white teeth too. Johnny tells them that they should get tanned too, as everyone looks better tanned, but he takes it back as the man that his father raced passed by, having a really red skin in some areas, with a white skin on other areas. Susan than says that Johnny's right, and that they could be transparent soon. Mary than says that they need to get tanned to impress Gil, but Johnny says he needs something too, gills, and fins on his feet. Mary says they wish they'd help him, but they're too busy with Gil, to which Johnny says he understands, and then tries to tell Gil his sisters love him, just to be stopped by them halfway through the sentence. Afraid of embarrassment, Susan and Mary agree to help Johnny, as the scene moves a bit forward, to the Test family's car.

There, Susan and Mary turn the car into a portable lab. Susan says that the transformation process will start in 10 seconds, much to Johnny's bore, who tells them to hurry, which they do. As Johnny is transformed, he calls himself Deep Sea Johnny, King of the Sea, and quickly runs into the ocean. Seeing this, Dukey starts complaining, but he gets transformed too by Susan, making him unable to speak as he wasn't able to breath. After Dukey jumps into the ocean too, Mary says that they should start working on their tan, but, as she left, Susan says that she has her own tanning method, and, off-screen, starts working on the Auto-tanning Spray.

Underwater, Johnny asks Dukey what they should explore first, the underwater life, showed by the scene as a Shark, Octopus and Eel playing with a balloon fish, the toxic waster, near which a seashell with eyes and feet, a sea snake with seashell head and a twin-headed fish swim, or the underwater civilization, shown as a big city protected by a glass shield. Not waiting for Dukey's answer though, Johnny starts playing with the toxic waste, to which Dukey says that, in a fair world, he would be his own pet.

On the land, Susan is seen finishing the auto-tanning spray. She says that it's still untested, so it could have devastating effects, and, since Johnny is a fish, she goes and tests it on Mary, who, at first seems glad that Susan sprays her, thinking it is a sunscreen, but quickly changes her thoughts as she sees her skin changing colors. Angered, she says that they had a rule, not to test experiments on each other, but Susan says that the rule applies only in the lab. she than says that she only sprayed her with the super toxic, Auto-Tanning Spray, and it seems to work somehow. Mary doesn't seem to like it as her skin changed green, saying that no one will like a green tan. As she becomes angrier, her skin changes to red, which Susan notices and tells Mary to calm down, which she does, changing her skin color to blue. Susan becomes excited about it, saying she invented a mood lotion, but Mary becomes angry once more, presumably because she was the test subject.

Back underwater, Johnny and Dukey start exploring the Underwater civilization, with Johnny tapping the glass to gain the underwater people's attention. As they gather and look at Johnny, one of them points to a sign saying "Please do not tap on the glass", making Johnny say that the underwater adults are as lame as the ones on surface. As he leaves, he spots something shiny, and tells Dukey to look. Dukey, looks at first at a chest filled with gold, but Johnny tells him that he doesn't mean there, and points to a 25 cents coin. As Johnny swims to the coin, Dukey turns to the underwater civilization, asking them to allow him to live there, but once again, the same individual who showed Johnny the sign. shows Dukey the "No dogs allowed" sign.

Back underwater, Johnny starts playing with the coin he found, redirecting light into the shark's, octopus' and eel's eyes, making them angry. Johnny than says that it's nice to play with animals in their own habit, and, after he redirects the light into his eyes too, Dukey says that he sees 3 angry creatures coming for them, telling Johnny to do something. He says that his lucky coin will save them, and throws them at the shark, octopus and eel, missing though, and hitting the glass shield over the underwater civilization's city instead, breaking it. Afterward, Dukey tells Johnny to run as they swim away, and get back on the land. There, they change themselves back to humans, but the ray hits the shark, octopus and eel too, allowing them to breath on land. Dukey than says that, thanks to them, 3 deadly creatures can now live on land, and that they must solve that, to which Johnny agrees.

Back at the test sisters, Gil invites a green-skinned Mary to a party that night, but the shark bites him before he could finish the sentence. Johnny and Dukey are than seen running after the shark, but quickly turn back as they see Mary's skin, which changes color to cream with green stripes as Johnny touches it, and to cream with red dots as she hears Gil screaming for help. Johnny than tells Dukey to go to the beach club and stop the eel, and he'll try to save Gil before he is eaten.

At the club, Dukey sees the eel shocking the people in the pool as he gets it's head in it. Thinking quickly, Dukey takes the lipstick of the lifeguard, and draws a girl's face on the eel's tail. He than asks the eel why he wastes his time with the kids when his tail ogles him. The eel, listening to Dukey, turns to his tail, and, as he kisses it, shocks himself, falling to the ground.

At the snack bar, the shark is seen putting mustard on Gil's head, as Susan and Mary threaten Johnny that, if the shark eats Gil, he's next. Johnny starts thinking, and, as he spots the bad tanned man, tells the shark that, even though Gil looks good, the bad tanned man looks even better. Seeing him, the shark quickly heads to eat him, as Mary, whose skin is now back to normal, asks Gil if he's alright. Seeing her, Gil asks her if he knows her, but, as Mary tells him that she's the girl with weird skin, he says he doesn't remember, and salutes Johnny, why tells the girls that he's sorry it didn't worked as they planned. The girls than asks him if the means it, but Johnny says no, and says that they must solve the shark problem, telling the girls to go at the mobile lab and have the device prepared. Johnny than starts hitting the shark with volleyballs, in order to make it get away from the bad tanned man. Dukey is than shown dragging the eel, who seems to have fallen in love with it's tail, to Susan and Mary, telling them to send it back in the sea before it breaks up with its tail. The girls than turn the eel back to normal, as the still attacked with volleyballs shark shows up near the lab too. After the shark is turned to normal and back in the ocean, Johnny asks where's the octopus, and the scene shows it to be in the sushi shop, making Dukey say it's a irony. Johnny than sighs and goes to the shop, as Dukey says that he didn't knew the octopuses eat people too, but Mary says it's just a side effect of the transformation device. 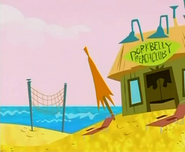 Susan realizes she created mood lotion
Add a photo to this gallery
Retrieved from "https://johnnytest.fandom.com/wiki/Deep_Sea_Johnny?oldid=40283"
Community content is available under CC-BY-SA unless otherwise noted.