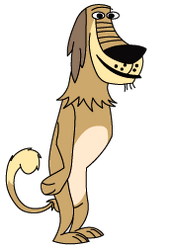 Dukeson Leonard "Dukey" Test is Johnny's pet dog brother and the deuteragonist of the show. Johnny got him as a birthday gift for his 11th birthday and he was later mutated by Susan and Mary, giving him the ability to speak and walk on two legs.

He is the voice of reason in many episodes but often winds up joining in Johnny's crazy schemes and adventures (usually because of steak or Johnny tempting him into it). Despite his devotion to Johnny, Dukey frequently expresses deep disdain towards Johnny's less intelligent antics, believing their situation as master and pet reversed. He usually gets more stressed than his master in dangerous situations and often gets worried whenever there's a risky test for Johnny from his sisters.

Despite his uniquely human abilities, however, Dukey is still a dog who can't deny his natural dog urges. His dog habits greatly annoy Johnny's sisters, to which Johnny takes deep delight. Usually, once per episode, when trouble arises, and there's no alternative, Dukey will say something along the lines of "Here's an idea: RUN!" Dukey has admitted that he's ticklish and can't resist a belly rub from Johnny.

Similar to Johnny's "Johnny X" form, Dukey also has a secret identity which, unlike his master, he does not particularly enjoy called "Super Pooch" (although he "Super Dukey" and "X-Pooch"). He also likes to drink hot coffee. His favorite food is steak (all kinds of steak with porterhouse being his favorite).

Dukey also appears to have a strong memory of certain situations. For example, when Johnny attempts to catch a cold from Sissy Blakely to skip school but gets sent flying out of the house, Dukey says something along the lines of "Didn't get the cold?" even though he was waiting outside Sissy's home at the time.

Dukey and Johnny's relationship can be seen as similar to a boy and his dog but due to the fact that Dukey has the ability to speak, their relationship can be more easily described as brother-like. Dukey likes to hang out with Johnny a lot but he is frequently annoyed by Johnny's shenanigans and often tries to talk Johnny out of them by reminding him of the potential consequences of Johnny's actions but Johnny usually does not listen to him.

Dukey goes as Super Pooch/Super Dukey (later episodes) when Johnny goes as Johnny X. Dukey claims that he hates becoming Super Pooch in "The Revenge of Johnny X". When in "SuperPooch" form, Dukey can fly and in the Third Season has shapeshifting powers, the ability to sense what others are doing, and the ability to teleport. He has the power to fly as a sidekick (to Johnny) but usually crashes when landing. Also, in "The Destruction of Johnny X" Dukey claims that his Super Pooch costume gives him a mega-wedgie. Dukey isn't as enthusiastic about being a superhero as Johnny is, but he is forced to go along with his schemes on account of reverse psychology, guilt, and offerings of steak.

The gallery for Dukey can be found here.

"Karma always gets you."

"You never listen to me!"