View source
watch 01:36
We're Getting Mutants in the MCU - The Loop
Do you like this video?
Play Sound
Evil Johnny 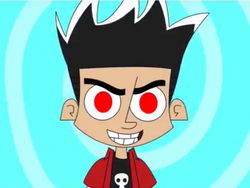 Phisically, he looks exactly like Johnny, though his coloring is inverted. His hair is black with white highlights, his eye color is red, his radioactive symbol is also black with a Skeleton on it, his overshirt is Red and his pants are a darkish Red. He also talks in a Cockney accent as well.

Evil Johnny Infront of the gang

Joni Takes A Picture In Front of Evil Johnny