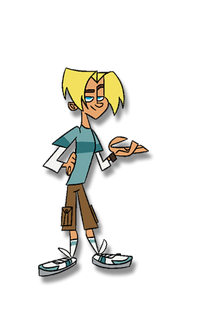 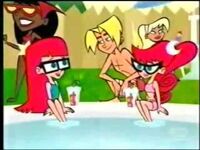 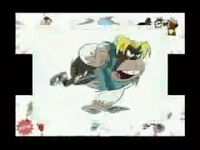 Gil Nexdor is a teenager about 15 years of age living in Porkbelly. He is the neighbor of Johnny, Susan and Mary Test. He is characterized as a popular boy, perhaps the most popular of all but with little intelligence.

Throughout the series, he has been seen as someone distracted that only cares about things that are cool, like skateboarding, or has pool parties. This is why he never remembers Susan or Mary (they are not cool), but Johnny and Gil get along (according to Gil, Johnny is cool). Gil has shown little intelligence; according to Hugh in A Scholarship for Johnny, he can barely spell his name, or in Johnny's New Baby Sisters he fed extremely hot chili (among other things) to Susan and Mary as infants, but academic performance is unknown (It is implied that he does not do his homework, as he is almost always shown skateboarding or having fun). Despite everything, he is seen doing housework, or being a good cowboy.

Throughout the show, his favorite things are shown. He loves smelling things, likes rabbits, onions and hunting ghosts. He is shown to have a fear of monsters. His lack of intelligence causes him to be unaware of Johnny's adventures with Susan and Mary. Also, he gives nicknames to people who he does not know. For example, Susan and Mary are "girls I've never seen before", or Jilian is the "wild green hair girl".

Gil's intelligence has varied throughout the series. In season 1, he knew who Susan and Mary were, and knew they were Johnny's older sisters. From season 2 onward, though, he is almost completely idiotic. When he babysat Susan and Mary when they were infants, he gave them plastic bags to play as (which are a suffocation hazard), and tries feeding very hot chili to babies (though he did admit he was not a good babysitter). A good example of his ignorance and idiocy is the fact that, despite multiple episodes, he can never remember who Susan and Mary are, always referring to them as "girls I've never seen before". This is explained in one episode, where it is revealed that this is because he undergoes regular mind-wipes by Susan and Mary after he gets mixed up in their misadventures. He has trouble spelling his own name, displaying his extremely low intelligence. He does display some level of intelligence, though, being able to speak coherently, carry out basic functions, and comprehend right from wrong.

Gil has many things he likes. During the series, many of them are revealed (due to the fact that many of the episodes are about Susan and Mary attempting to woo Gil based on those things):

Johnny Test is a very good friend of Gil, he is always looking to talk to Johnny and calls him "Johnny bro.". Gil loves participating in Johnny projects, such as when robots built their new Treehouse.

Although it is obvious that he is oblivious when around the Twins, it is possible that he may be attracted to them. One example is in the episode Johnny vs. Super Soaking Cyborgs, in which he grows jealous when the Boyborgs are around the twins.

Johnny's sisters, Susan and Mary both have a crush on him. However, he hardly ever remembers their names, unlike Johnny's. According to Susan and Mary, Gil loves animals. In fact, he owns an oddly shaped bulldog. However, he adores rabbits. He favors them so much that he chooses to "lock my bad doggie in a pen, and we can frolic about." He also likes to smell things, even manure, as shown in Johnny Smells Good. One of the only times Gil shows exceptional intelligence is when Susan and Mary in lion form show up in his back yard and he tricks them, making them think he'd give them pretty collars, but instead calls animal control. In the episode Sleepover at Johnny's, Gil has an immediate crush on Jillian Vegan, which is somewhat ironic, because Gil hardly even knows Jillian.

Gil has blond hair, but his eyebrows are brown (for what originally may have dyed her hair) and his eyes are blue. Wears two shirts, a white with long sleeve, and one blue with short sleeves which has a dark stripe in the middle. It also has brown shorts and a bracelet. He also uses sneakers. Gil is not shy to take off his shirt revealing his bronzed body and six-pack abs which is what makes Mary and Susan swoon over him. He is seen shirtless fairly often in the show.

Monkey Boy is the alter ego and a superpowered villain who was actually Gil when he ate a magic gum that was supposed to make him fall in love with Johnny's sisters. Unfortunately he turned into a wild and muscular monkey who has ripped clothes, big shoes, messy hair, gorilla hands, a monkey face, and the weirdest thing is he has no tail. For this reason, he wasn't a monkey, because monkeys have to have a tail. For this reason, a more apt name for him would be Gorilla Boy, or Chimpanzee Boy. Johnny and Dukey used their shape-shifting powers to capture him. Monkey Boy then reforms and turns back into Gil. He only appeared in the episode Johnny X. Mostly gill is interest to Susan and Mary 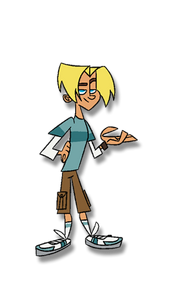 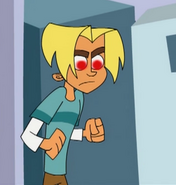 Furious at the Twins for locking him up in a titanium box.
Add a photo to this gallery
Retrieved from "https://johnnytest.fandom.com/wiki/Gil_Nexdor?oldid=33129"
Community content is available under CC-BY-SA unless otherwise noted.