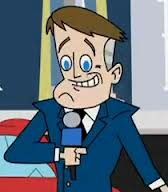 Hank Anchorman is the anchorman for Porkbelly News. In early season 1, he had blond hair, was thinner and younger, but later on, he had brown hair, he was bald and wore a wig to cover his head. He is also older and has a different face. In season 5, he wears a green suit. He has a daughter as seen in Take Your Johnny to Work Day. Although he usually comes out of nowhere on the TV and helps them with difficult and mostly strange objectives and missions.

Hank Anchorman is shown as having gray hair (Blond in season 1) with a brown wig (however, his gray hair still shows on the sides of his head) and long, thin eyebrows. He has blue eyes and often wears a smirk and a blue suit with a black tie and white buttons. One of his noticeable features is his large chin.

Retrieved from "https://johnnytest.fandom.com/wiki/Hank_Anchorman?oldid=38650"
Community content is available under CC-BY-SA unless otherwise noted.