This is a list of inventions that have appeared in Johnny Test.

Atomic Earth Dozer: A drill designed to dig underground. It was used to dig to the center of the Earth.

Episode First Appeared: Johnny to the Center of the Earth

Result: Turns Johnny into an attractive teenage girl for several seconds.
Side Effect: Will almost immediatly transform the person into a giant ugly girl monster.
Episode First Appeared: Johnny to the Center of the Earth

Bubble Love Gum: Designed to mutate the subject's attraction cells and make them fall in love with the first people they see

Result: Gil falls in love with Susan and Mary.
Side Effect: It turns the subject into an ape monster.
Episode First Appeared: Johnny X

Alchemist 5000: A microwave type machine that turns any metal object put inside it into gold. When connected to Bling Bling Boy's laser, it shoots a gold beam that turns anything it touches into gold.

Super Strength Milkshake: A milkshake that can make anyone tall and super strong. When Johnny drank it, his muscle mass increased by over 800%.

Kung Fu Power Simulator: A machine that can give you extreme kung fu powers, by wire connection to most of the parts on the body, meaning Johnny had to be in his underwear. The machine then gives an electric shock to the user. When first used however, it instead made Johnny and Dukey dance, due to the wrong CD being injected.

Hair Tonic X300: A bottle of hair tonic that creates hair growth. After seeing how much Johnny's hair grew, Susan and Mary threw this one away. If you look at the bottle right before it's tested on Johnny, you can see that it says Tonic X300.

Xtreme Magno Tracking Laser Hype (XMTLH) Baseball: A baseball marked with the letter X. It has a built homing system to a special type of bat with 4 settings. Single, Double, Triple and Home Run. A light or hard swing doesn't matter as long as the bat makes contact with the ball. Apparently, the bat still works even when the ball is inside Dukey's stomach.

Phero Booster: A liquid that boosts pheromones so that the user becomes attractive to anyone they meet.

Result: Makes Johnny more attractive and charismatic
Side Effect: Will eventually turn someone into a completely ugly monster, counteracting the whole thing. By completing an emergency pheromone transfer, it can increase the user's appeal, but drain the donor's. The donors must be related.
Episode First Appeared: Johnny Test: Party Monster

Super Cool Tiny Spy Car Thing: A tiny car that eject people into the air, release a giant claw with 800 tons of grappling power, features a turbo boost setting and 70's chase music. It can also release a giant pillow on it's side. Mr. White is the one who referred to it as the super cool tiny spy car thing.

Fish Ray: A ray that rearranges the cells of the user's body to turn them into a fish. Just like real fish however, they can't breath on land. When used again it turns the user back to normal. It also has the ability of making fish survive on land. It has a slight man eating side effect.

Hyperkinetic Tanning Spray: When sprayed on someone, it changes their skin's color depending on what mood their in. Gil called it kaleidoscope skin. The only colors that were shown associated with emotions were:

DNA Hoop: By putting a hair sample in the hoop's slot, then putting the hoop over someone's head, they are transformed into a replica of the sample organism. The larger the DNA sample the longer the effect lasts.

Turbo Action Backpack: A backpack designed to do whatever the owner tells it to. It has a built-in Shrink-ray, can turn into a car, give someone a bath, project holograms and movies, turn into a video game system and has a Jet-pack.

Electric Lettuce Accelator: Electros that can be plugged into a head of soil. They're supposed to excelerate vegetable growth but failed. This was one of the lost inventions by Thomas Edison. When Johnny and Dukey went back in time, they suggested using nachos, which Thomas Edison added to his plans, thus why the invention makes nachos.

A lifesize teahouse used to go back in time. Pulling around the teacups adjusts the coordinates, and pulling the creamer makes it go.

Construction Drones: Robots programmed to build anything the user tells them to.

Hairdo Ray/Big Hairdo Ray: A giant ray that when shot at someone, gives them different hair styles. It's side affect is making the user bald. There is also a ray which makes hair bigger and has a laser side affect.

Super Smarty Pants: A pair of white pants with a microchip belt buckle that when worn, increase the user's intelligence and more. The pants however, became alive and developed emotions. Johnny used the pants to impress Janet Nelson Jr., but the pants became jealous.

Fuller Lip Lozenge: While sucking on it, the user's lips become fuller and apparently more kissable. It's side affect is making the user's lips giant so they hang down from their mouth.

Spaceship: A regular spaceship made by Susan and Mary.

Ultra Reality Video Helmets: Put any video or dvd in the player and put on the helmet with matching sensors and you're virtually sent inside the video. It's so virtual, that anything that happens in the video can affect the user. Turning the power off on the dvd player will prevent the user from being able to come out.

Wind Machine: A lever on the wall of the lab that activates a wind machine, which sends anyone unprotected into a dark vortex...which leads outside. Susan and Mary used bars attached to the wall to avoid being sucked in.

Turbo Time Rewinder: An MP3 laser player. It stores 15,000 songs and a 40 megawatt foton laser, referred to as death ray. It also has the ability to pause and rewind anyone for up to 5 minutes. All that needs to be done is to point the device at someone and press either the pause or rewind button. Bling Bling has a similar device called the Omni Mega Giganto Rewindatron.

Electro Chromatic Blanket: An invisible blanket that can make anyone or anything invisible

"Sonic Super Scooter (Scoots)": A super fast scooter made to replace Johnny's Super Lame-O Slow-Mo Scooter. When Johnny used it, he tested he mach 9 setting that when used, sent him through a ripple that caused a global blackout, therefore sending he user to an alternative future.

Mega Action Game Controller: A modified game controller that when pointed at someone, allows the user to control them like in a video game. It is also effective when using it to play a real video game.

Self-Wave Generating Surf Board: A surf board that can generate waves to ride on.

Photonic Laser:A laser created by one of the kids at the Mega Institute of Technology that, when connected to Brain Freezer's Frozen Coffee machine, has the power to freeze anything.

Molecular Firecracker: Created by Bling Bling, the firecracker can disintegrate all inorganic matter within it's range.

Impulse Propelled Equilibrium Enhancer (Dance-A-Tron): A dress that automatically does dance moves that correspond to whatever type of music is playing. Originally music activated, it was changed to voice activated.

Bionic Arm: Based off the same technology as the Dance-A-Tron, the Bionic Arm controls the user's arm, increasing it's power by 3000%.

Paralysis Gas Breath Spray: Breath spray Susan and Mary made, that when sprayed, stuns whoever is in range of the spray.

Armored Suits: Purple and white suits of armor Susan and Mary probably made out of titanium, meant to protect them, Johnny and Dukey from the evil Robot Pals.

Baby Ray: A ray that Bling Bling made so he could turn into a baby. He also has a version installed in his stroller. The setting can be adjusted by number of days, months and years old.

Dadatron: A machine made to make another version of Hugh. By putting certain items in the machine, changes the outcome personality of the new dad. The first try, the new dad ended up going insane by exposure to unstable plutonium.

Saturday Repeater Machine: A small box like machine with a red "snooze" button on it. When pressed, the day automatically rewinds to the beginning of the most previous Saturday.

Nitromatic Courier System: A pod that can fly to specific locations for transportation, or delivering locations.

Giant Pod: A giant pod made by Bling Bling. He used it to capture Susan, and filled it with an arcade, a chef, movies, a pool, and more to impress Susan. It has arms and legs to walk around and pick things up. It also has several tubes used for sucking things into it. It has the ability to use it's top to crush things. Other features include a giant badminton racket, a hose, and missiles.

Hyper Holographic Virtual Mind Chamber: A small chamber that can simulate different environments, made to relieve boredom. The only environment shown is a hot desert like battlefield area. The helmets put on the user's head are what stimulate the environment.

Robot Duplicator: A machine that can duplicate anyone and make a robot clone of them. They respond to voice commands. They also say "I'm Johnny" continuously. However, the robots become defective if they are made into copies.

Microbe Mobile:A submarine made to be sent inside Mr. Black's and Mr. White's body to erase their memories of being ordered to spy on Susan, Mary and Johnny. In order to fit, the submarine was shot by 10 million gigawatt shrink rays. The submarine comes complete with an autopilot and fully stocked snacks.

Clone-Hopper: By putting a DNA sample in the machine, a clone can be made of the sample organism.

Anti Johnny Sad Look Goggles: Goggles that block the powers of Johnny's super sad look. He uses it along with a radio playing sad music, to break down his parents.

Diving Suits: Diving suits made by Susan and Mary that are equipped with underwater camera and sonar equipment. They made them to dive into Lake Porkness and see if the Pork-Ness Monster is real.

Cat Zapper/Electro Sonic Pulsar: A zapper Tim Burnout made to give his cat, Mr. Mittens to give him intelligence. Mr. Mittens tinkered with it so he could use it to turn dogs and people into cats. The Electro Sonic Pulsar is a machine owned by the government, that can send a 1 million gigawatt pulse, 100 miles wide, that can create an implosion so strong, it could wipe out an entire city's power.

A machine with a booth that gives special makeovers to the person who goes in it (such as goth, glamours, etc). but it also needs strong power resources to get activate.

Dragon: A dragon created by the girls to test who is the best knight among Sissy and Johnny.They used dino DNA, Bird chromosomes, Badger attitude to create it plus fire breath was created as a secondary effect.

Theme device: A pen-designed machine that can set reality into a movie that has been chosen on it. (Scary, Romantic, Spy, etc)

Easy Peasy Readzy: An invention to read books faster and easier by showing the events of the book on a screen. 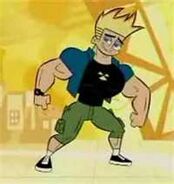 Johnny under the effects of the Super Strength Milkshake

Retrieved from "https://johnnytest.fandom.com/wiki/Inventions?oldid=40625"
Community content is available under CC-BY-SA unless otherwise noted.