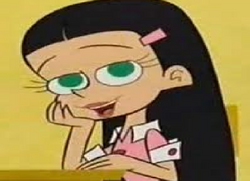 Janet Nelson Jr. (voiced by Kathleen Barr (Seasons 1-3 (2005-2006)) is Johnny's former crush and is the vain, shallow 11-year old popular girl who's usually mean and inconsiderate to Johnny and regards him as a loser. She has a love-hate relationship with him, but she is too popular to express the love part. She is also extremely intelligent. She only appears in season one and one episode in season two. She appeared in Johnny Holiday when Johnny first sees the Bee Keeper. She also appears in Johnny Test: Party Monster at the begining and later towards the end. She appears once in the third season in the background, talking to another student. She hasn't appeared since then, and Sissy seemed to have replaced her as Johnny's love interest.

Janet, like all sterotypical rich girls, is bossy and demanding. She also seems to enjoy watching nerds and losers in pain. However, in both Johnny's Super Smarty Pants and Johnny Test: Party Monster, she appears to tolerate and have feelings for Johnny, hence skipping down the road with him in the former and boogieing down with him in the latter.

Janet has black part-at-top hair going down past her waist with a pink hair-clip above her ear. She has green eyes and like the rest of the females in the show, semi-dull pink lips. She wears a pink shirt with white cuffs and collar and long white dress pants covering her black shoes.

Retrieved from "https://johnnytest.fandom.com/wiki/Janet_Nelson,_Jr.?oldid=33130"
Community content is available under CC-BY-SA unless otherwise noted.