Johnny's Pet Day is the first part of 18th episode and the 35th episode over all.

Dukey gets jealous when Johnny takes Repto Slicer to school for pet day over him. However, this lands him in danger of becoming a TV star with the news crew when he sneaks into school. 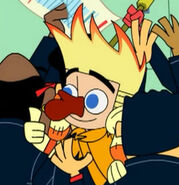 Repto Slicer and Speed Mccool on talkshow
Add a photo to this gallery
Retrieved from "https://johnnytest.fandom.com/wiki/Johnny%27s_Pet_Day?oldid=39778"
Community content is available under CC-BY-SA unless otherwise noted.