Johnny's Royal Flush is the first part of the 62nd episode and the 123rd episode overall.

Susan and Mary turn Johnny into a fish to see if Dolphins understand immaturity, but he accidentally gets flushed by Hugh.

The Test girls transform Johnny into a fish to see how dolphins react to trash talking. After the dolphin heard the insults, he beats up Johnny making a huge splash on the transformation machine. After the test, Susan and Mary realize the water shorted out the machine they have to repair it. Since Johnny was still Johnny, instead of living in a cup, he wanted an actual fish bowl with a castle and treasure chest. After watching the calm bubble flow from the treasure chest, Johnny falls asleep. Hugh then comes in Johnny's room to a seemingly dead fish. He flushes it down the toilet so Johnny doesn't notice. Johnny got sucked into the sewers and he found many items such as a taxi cab, a water proof dental drill, and a Sewer Alligator. Johnny then gets chased around by it.

Susan and Mary are tracking Johnny because there is a tracking chip inside him. When they fixed the machine, they turned Dukey into a fish to rescue Johnny. They flush him down the toilet, and he meets with Johnny, who made other fish friends. They all try to run away from the alligator. They make it to a disposer that is trying to suck them in. And to make it worse the alligator is infront of them. Johnny saw an opening on the top, and told everyone to swim up. There was a wall blocking them from the botanical garden. They try to jump over it, but the water pressure is too low. The alligator then follows them. Johnny then takes a risk by luring the alligator into the garbage disposer. The alligator swallows Johnny, but gets his snout into the snout disposer causing the water to rise. Johnny gets out with the water proof dental drill he found. They all then jump over the wall before the alligator is disposed. The overflow leads them to a botanical garden, where the fish get fed everyday. Susan and Mary found Johnny and Dukey and they go back home to turn them back into their normal selves by dinner. Meanwhile back in the sewer, two construction workers noticed some "alligator bags", much to their confusion.

Dukey: I don't believe this. Who flushes a chainsaw?

Johnny as a fish 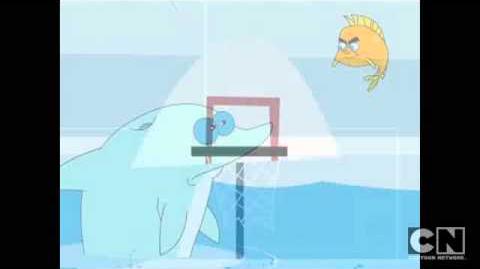 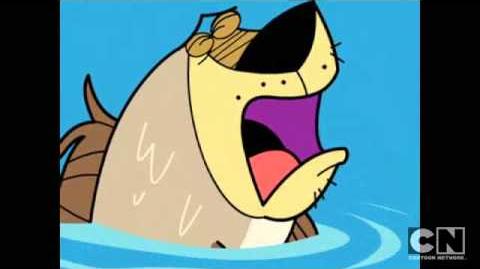 Johnny Test Johnny the Fish
Add a photo to this gallery
Retrieved from "https://johnnytest.fandom.com/wiki/Johnny%27s_Royal_Flush?oldid=40888"
Community content is available under CC-BY-SA unless otherwise noted.