Johnny Alternative is the second part of 80th episode and the 160th episode over all.

Johnny and Dukey get warped to an alternate universe and meet with gender swapped versions of themselves.

Johnny first thinks it didn't work until he sees the General is a female. Then Dukey notices that the sign says, "Welcome to Leadbelly" instead of Porkbelly. Then Johnny and Dukey got robbed of their drinks that the Female General gave them by Joni West (which he didn't know about at the time) and her dog Dutchy. Then Johnny confronts her in the park. But very soon joins her in her pranking. While eating burgers they have a mustard and ketchup war. Then they go to the carnival where the hit the man behind the booth instead of the bottles and taking pictures in the photo booth. Afterwards they go back to Joni's house for video games when her scientist brothers, Simon and Mark want to redeem a coupon.That also being interupted by Eugenia (Glam Glam Girl) wanting a kiss from Simon. Meanwhile Susan and Mary just got the portal reopened and are now searching for Johnny. Johnny and Joni both start to have unexplainable feeling that make them feel like their gonna barf. Madame Mittens (with Albertha) comes and Johnny wants to defend Joni but say the wrong thing and makes her angry. So Johnny and Dukey leave Dutchy and Joni, but right after Madame Mittens captures Joni with a net like thing. Then she escapes and runs away. Johnny and Dukey find out they are in love with Joni and Dutchy. Dutchy turns into a kitten from a blaster ray Madame Mittens shot at her. When Madame Mittens aims for Joni West, Johnny steps in and turns into a yellow and orange furred cat. Then Madame MIttens is frozen by Joni.

Then Joni turns everyone back to normal, she and Johnny share a moment as do Dukey and Duchy almost leading to all four kissing but getting disgusted until Susan and Mary pull Johnny and Dukey back into the real world. Johnny and Dukey tell them what happened before deciding that they leave it in the other dimension.

The female counterpart of the General.

Leadbelly, the counterpart of Porkbelly. 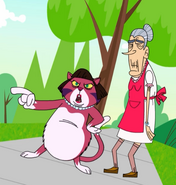 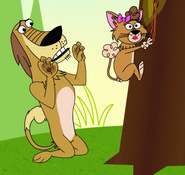 Dutchy has turned into a cat.

Now Johnny has also turned into a cat.

Despite their feelings, they get grossed out eventually. 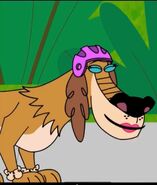 Add a photo to this gallery
Retrieved from "https://johnnytest.fandom.com/wiki/Johnny_Alternative?oldid=40802"
Community content is available under CC-BY-SA unless otherwise noted.