Johnny Re-Animated is the second part of the 59th episode and the 118th episode over all.

Sissy comes over to Johnny's house and doesn't leave as she needs for him to watch the Dawg and Bone Show with her. As a result, Johnny steals an invention from the girls to bring the cartoon's main characters to life to play with her. Susan and Mary warn them not to press the pause button, but it was too late. Johnny "accidentally" pressed the pause button and froze his sisters. The characters were gonna play with Sissy but they scared her away. The two cartoon characters are from a zombie hunting cartoon, so they think Johnny is a zombie. They hit Johnny and Dukey with frying pans thinking it won't hurt them. Dukey realized that they are from a "squash and stretch" cartoon, meaning that they can't get hurt in their TV show and in the real world, but everyone else can. The cartoons see their show on TV and think it is a portal. Then they try to jump in but they break the TV instead. So they try to blow it up. Dukey told Johnny to pause them, but remote broke when he was hit by a frying pan. Johnny and Dukey go to the lab to get the main DVR. Meanwhile, the two cartoon characters go outside to hunt people, thinking they are zombies. Three minutes later Johnny presses the unpause button and unfreezes the girls. Susan and Mary then discover how much damage they did. Susan and Mary then take the remote to fix it, while Johnny and Dukey stall the cartoon characters. Johnny and Dukey go to the cartoons on a dune buggy with built in frying pans and hit them with it. That made the citizens laugh at the cartoons. The cartoons got their guns, but then Johnny gets the Steam Roller Mode which flattens the cartoons. Next Johnny uses Super TNT Dynamite Mode. Still there are no results. But then they used Chicken Mode to prevent from being blasted. Susan and Mary finished the remote and went to give it to Johnny. Dawg and Bone were about to use a laser to destroy Johnny and Dukey. Susan and Mary gave Johnny the remote and he pressed the pause button one second before they were blasted. Johnny and Dukey put Dawg and Bone back in their show.

As the sisters prepare to punish Johnny, he tells Susan and Mary that Dawg has two genius brother that they might like. The kids go into the TV, and Susan and Mary flirt with the twins who are quickly infatuated with them while their dogs and brothers play. Then Dawg and Bone hits Johnny and Dukey with the frying pans.

(Johnny and Dukey explain everything, causing the girls to scream powerfully enough to make the whole house jump off the ground.) --- 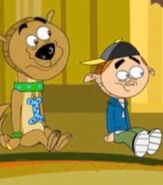 Derp face
Add a photo to this gallery
Retrieved from "https://johnnytest.fandom.com/wiki/Johnny_Re-Animated?oldid=38258"
Community content is available under CC-BY-SA unless otherwise noted.