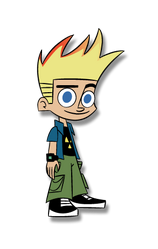 Johnathan Xavier "Johnny" Test is the titular protagonist of the series of the same name. He is a mischievous 11-year-old boy also known for his love of anything he considers to be awesome. He's the only and youngest son of Hugh and Lila and brother of Susan and Mary. He can live any kid's dream, only to find that some dreams aren't worth living. He is usually seen with his partner-in-crime and best friend Dukey, his genetically altered dog. He also redeems Johnny Coupons to his sisters in exchange for assisting them in their daily problems. When redeemed, he does their tests for free. Johnny and his sisters are often the cause of some problems in Porkbelly.

Johnny takes after his father, Hugh. He is a natural blond with the tips of his spiky bright red hair and has blue eyes. His blonde/orange hair makes people call him "the kid with the flaming/'fiery' hair". Johnny's general clothing consists of a black shirt with a hazard/radioactive symbol in the middle, a federal blue short-sleeved dress shirt, green pants, and black shoes with a light gray trim. He wears a watch on his right wrist. Johnny has been known to wear different costumes and clothing during the misadventures he goes through because of his sisters' experiments. It has been shown that he wears both white or blue briefs, as well as boxers and underwear.

He is very hyperactive and often messes with his sisters' inventions, causing chaos throughout Porkbelly, but just as often proves himself to be extremely clever, such as by frequently tricking his genius sisters or saving the day from whatever danger happens to show up. Johnny loves having fun, playing and goofing up as any child likes, sometimes he can be irresponsible, as well as his refusal to work hard or to put effort into anything when he could just as easily get the girls to help him but he usually learns his lessons when he fixes the problem himself. (101 Johnnies, rated J for Johnny, Johnny's Rat Race, etc) Johnny uses agency to get his way, though he does love his sisters in a way only a brother can, often trying to save them from whatever trouble they're into (Johnny's Monster Mash, Johnny's Pink plague, Johnny vs the tickler) He usually saves Porkbelly (sometimes when he is the cause of the problem in the first place) from the dangerous things that can harm it (using the girls' inventions or turning to Johnny X) as he immediately decides to save the town when a villain is attacking. on the other hand, Johnny can be brave, helpful to others and even kind and gentle sometimes that usually most of the other characters get surprised because of it. (tiny Johnny, Johnny cycle, Johnny holiday, A holly Johnny Christmas, etc) he even proved himself and his skills very well when his teacher said that he can do it. (Johnny Bench) and it appears that he can handle some jobs well if he just put some effort into it.

Johnny and Hugh have a complicated father-son relationship. as much as Johnny annoys his dad as any other kid would, he sometimes he does respect his dad, saving him (Johnny's key to success) or trying to help him. (Johnny on the job, Johnny's house of horrors) although, it seems that they both knew each other lives better after when they switched their lives for one day (Papa Johnny)

Lila usually goes with Johnny's side (my dinner with Johnny, Johnny's lockdown) and tries to control both Hugh and Johnny's weird actions, although that she's often busy with her work and annoyed by Johnny, she still loves her son.

Johnny maintains a love-hate relationship with his sisters. They use him as a guinea pig to test their potentially dangerous experiments, usually showing little concern for his health. In return, he often steals their inventions and uses them for his own good. He never listens to his sisters' warnings, which oftentimes leads to problems in Porkbelly. On several occasions, Johnny is shown to agree with his sisters and take their sides or usually save them in case they're in trouble.

Dukey is Johnny's best friend and pet dog. It's been said that Johnny saved Dukey from the puppy pound. (in Johnny's 100th episode, it showed clearly that Johnny accepted Dukey instead of a cute puppy his dad was showing them because he believed that he seems friendly) Dukey and Johnny both tag along with Johnny's sisters to do their experiments. Dukey acts like Johnny's conscience trying to keep the young boy out of trouble, but in the end usually goes along with Johnny's idea, often under the promise of steak. although they both go in much trouble he still respects his pet and often does anything to make him happy. (Bath time for Johnny, Johnnymister dog show)

Sissy and Johnny have been known to have a crush on each other though neither will show it openly. They often compete against each other.

Johnny and Joni meet in Joni's dimension in the only episode Johnny Alternative and the two had an immediate crush on each other. Johnny helped Joni defeat Madame Mittens and the two almost kissed but Johnny and Dukey were pulled back to their own dimension, the two have not seen each other since.

Johnny was attracted to her calling her hot several times. Claire initially didn't like him and was thrown out by her bodyguards several times, which irritated him to no end. He even considered her the villain (which was correct) instead of her father. However, he had made her laugh after using Mr. Black and Mr. White's argument and she invited him to her party.

At the party, his rant about her being evil was true as her father always had to work so she decided to blow up her dad's factory so he can spend time with her.

Soon, when it appeared that their house is nearby the factory, Johnny helped her to stop the missiles and save them. Her personality noticeably improved once she made up with her father, becoming considerably friendlier. She even kissed Johnny on the cheek and wanted to date him but her father stopped this, to Johnny's annoyance. The two have not seen each other since.

Johnny X is Johnny's superhero persona, first used to subdue a mutated Gil. This persona was used frequently throughout the series, in which Johnny had many amazing adventures, almost always using Dukey as transportation as "Super Pooch", while he could fly, of which Dukey initially seemed to enjoy, but later seemed to simply be annoyed with.

"Didn't see that coming." "Say what?" "From now on you are to address me as Johnny X!" --Johnny X "Johnny want!" "NOOOOOOOOOOO!" "Surrender mole people!"--Johnny to the Center of the Earth "Looks like it's time for Johnny X and Super Pooch!"

Retrieved from "https://johnnytest.fandom.com/wiki/Johnny_Test_(Character)?oldid=40775"
Community content is available under CC-BY-SA unless otherwise noted.