Marionette Louise "Mary" Test is one of the two tritagonists of Johnny Test. She is the eldest of the two twins.

Mary is a super genius and the older twin sister of Susan and also the older sister of Johnny. Mary has been shown to be more empathetic and sympathetic than her sister. Like her sister, Mary harbors a deep love bordering on obsession for the Tests' next-door neighbor Gil Nexdor. Like her sister, she attends school at the Porkbelly Institute of Technology (a.k.a. "Porkbelly Tech" for short). Mary is prone to believing in the less scientific and more science-fictional, which, although it receives scorn from her twin, often proves to be correct in the end. Mary seems to be more level-headed than her twin Susan, and Mary tends to be more conservative, as she speaks her mind much less than Susan. Though Mary wears pants, she seems to be more "girly" than her twin Susan. This is revealed when she decides to make a normal dress in the episode Princess Johnny. Mary is the older twin of the two. Her age appearance appears to be somewhere around fifteen years old. Susan and Mary test are very smart. They are smarter than Bling Bling Boy and Mr. Black and Mr. White, but one thing for sure: they don’t know how to get Gil's love. Susan and Mary Test would both like to be Gil's girlfriend, which often gets them into tied fights, proving her brother's intelligence of knowing that she and her sister can't both have Gil as a boyfriend.

Mary has long curly red hair tied in a ponytail and teal eyes. She wears a light yellow shirt with a blue moon on it, baggy blue jeans, light olive green sneakers with the shape of an ivory-colored crescent moon, and a white lab coat. She wears a moon-shaped barrette in her hair. She and Susan both wear glasses. When she is seen without her glasses in Downhill Johnny, her eyes appear as green dots. But in Johnny's Got a Wart!, her eyes are like everyone else's. Her eye color is the same as her mother, Lila's. Her bathing suit is a pink two-piece bikini. Her disco outfit is a purple tank top that reveals her midriff and navel, with magenta shorts, and silver boots. She also has outfits suited for certain controlled experiments, such as a high-tech diving suit, and a skin-tight yellow hazmat suit. Both suits have her trademark moon on the side. When handling bio hazardous materials, usually while performing surgeries, she dons a surgical mask and a pair of cyan-blue latex gloves. As a vampire, Mary dons a long, black dress that covers her legs, with her dress having alot of indigo accents on it, including a large cape that acts like wings whenever she flies, and a small red spider can be seen at the front of her dress. Her moon also becomes indigo, and her eyes becomes chartreuse, with 2 long and sharp fangs sticking out of her mouth

In Season 1, Mary was portrayed by Brittney Wilson. During Seasons 2-4, the role was taken over by Ashleigh Ball. Wilson reprised the role in Season 5, with Ball taking it back for Season 6. She is voiced by Laurie Hymes in the web series.

Mary and Susan have a wonderful sisterly relationship. As twins, Mary can often read Susan's mind (like "twin telepathy"), and it's typical that they're both geniuses. Working in a lab all day long can make Mary and Susan totally exhausted, and so they don't have the energy to help Johnny with his problems. Also, Mary and Susan do almost everything together, like staring at Gil (their biggest crush), or conducting new experiments in their lab. However, despite their relationship, they can sometimes bicker when it comes to their differences.

Mary has a complicated relationship with her younger brother Johnny, although she somehow seems most compassionate to Johnny more than anyone else (unless Susan makes an accurate point). Also, Johnny tends to be nicer to Mary than Susan for that cause. Also, Johnny doesn't annoy Mary that much, although she too can dislike Johnny's antics as well. She loves her younger brother very much.

They do seem to get along well and tend to come up with plans on getting Johnny out of trouble.

Mary loves her father, but despises his meatloaf and his constant punishments for conducting experiments.

She and her mother has a healthy mother-daughter relationship. Unlike Hugh, she doesn't go as far as to punish her daughters but only when necessarily.

Like Susan, she is head over heels for Gil. She does things with Susan from watching him from the satellite in their lab and trying to hang out with him. Also, despite the fact that Gil has been living next door to the girls for most of his life, he often forgets them, much to their dismay.

She despises him since whenever he comes to woo Susan, he cuts into their time inventing.

The Test kids and Dukey, ready for battle 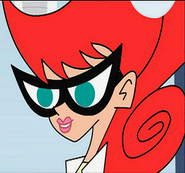 Susan and Mary as babies.

Susan and Mary as vampires.

Susan and Mary in purple forms.

Susan and Mary with grown heads.

Mary with Susan in Paris

Mary and Susan were at Kindergarten

"Did you say super cool?"

Mary asking Gil to be out VIP Guest

Mary getting a high five from Johnny.

Mary all bandaged up along with Susan

Mary as a Dog in Here Johnny, Here Boy 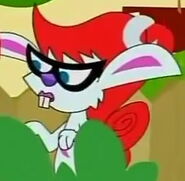 Mary as a Rabbit in Here Johnny, Here Boy

Mary as a Lioness in Here Johnny, Here Boy

Mary as a Hamster in Johnny's Petting Zoo Posse

Mary in her Wrestling Outfit in Stinkin' Johnny

Mary in her Beret without a Lab coat in Magic Johnny

Mary in her Yellow Dress in Johnny's First Annual Snowball

Mary in her Cruise Outfit in Johnny Cruise

Mary in her Black Spy Outfit in Johnny Cruise

Mary and Susan getting their feet tickled by The Tickler 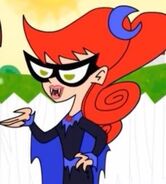 "Hip teen vampires glitter in the sun now"
Add a photo to this gallery
Retrieved from "https://johnnytest.fandom.com/wiki/Mary_Test?oldid=43865"
Community content is available under CC-BY-SA unless otherwise noted.