Miss X and Miss Z (voiced by Brittney Wilson in Season 1, Maryke Hendrikse in Season 2) are two women who are actually cyborgs created by Bling-Bling Boy to work at his disposal. They only appear in a few episodes in Season 1. Their only other appearance is when one of them makes a cameo the Season 2 episode, Johnny vs. Bling-Bling 2, bringing Todd (Bling-Bling-Boy) to Johnny's door. The voice of them in the second season changes, becoming more robotic. 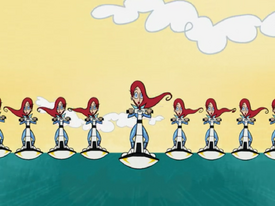 Retrieved from "https://johnnytest.fandom.com/wiki/Miss_X_and_Miss_Z?oldid=40265"
Community content is available under CC-BY-SA unless otherwise noted.