Montague is a small, lab rat, experimented on by Susan and Mary Test. He was also given the ability to talk, like Dukey. His obsession with cheese and world domination, and this is also to be known to do something about with Anarchy and its speeches, it is obvious in many episodes. Montague is a parody of Brain from Pinky and the Brain because of his wish to rule the world. His voice was slightly different in the episode Johnny's Royal Flush for some unknown reason. He is also seen in the episode Tom & Johnny where he somewhat helps out the gang by unstunning them (minus Albert and Hugh).

Montague's appearance is a small, grey mouse with a pink nose, and ears. He is usually seen wearing a robins-egg blue cape, armed with a kebab skewer as a weapon. In the episode Tom and Johnny, Montague was also seen wearing a yellow green suit, resembling those armors from the Halo series. He is slightly chubby, compared to some mice. 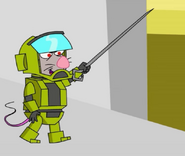 Wearing a suit from one of Johnny's action figures. 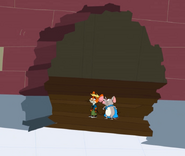 Montague and Mouse Johnny seeing the big mouse hole.
Add a photo to this gallery
Retrieved from "https://johnnytest.fandom.com/wiki/Montague?oldid=41166"
Community content is available under CC-BY-SA unless otherwise noted.