Mr. Henry Teacherman is Johnny's teacher, who Johnny believes is "out to get him". Mr. Teacherman is tough, but only because deep down, he knows that there is a great student inside of Johnny. Mr Teacherman's name was revealed in Johnny Bench when the Principal Jules Harm told him to not be so ridiculous. He also revealed that Henry has been teacher of the year for three years in a row. 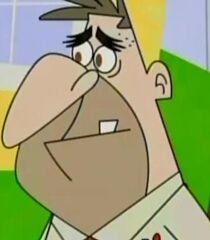 However, despite not being as malevolent as Johnny thinks he is, he still does appear to be quite a harsh teacher who tends to enjoy his students failure from time to time. One example is when he gave his class a test on stuff he knows he hasn't taught them yet so they'll all fail. He also once gave his students weeks worth of homework that had to be completed the following day. Also, he once tried to get Johnny to go to summer school by refusing to offer extra-credit assignments; when the principal revealed that he had to offer such assignments under school policy, he gave out assignments far too tough for Johnny to complete correctly (all of which managed to backfire on him when Johnny asked his sisters for help and ended up somehow hurting Mr. Teacherman).

Retrieved from "https://johnnytest.fandom.com/wiki/Mr._Henry_Teacherman?oldid=41244"
Community content is available under CC-BY-SA unless otherwise noted.