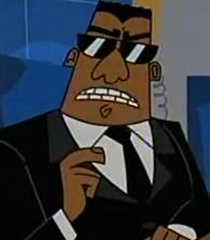 Mr. White is a secret government agency agent that works with Mr. Black and The General. Mr. White and Mr. Black are always at the Tests' house getting Susan and Mary to build them new inventions weapons. Mr. White is voiced by Scott McNeil.

Mr. White, like his partner is a mutant (Johnny X). His powers include things such as an ability to shoot ropes out of his hands. It is unknown how he can shoot them, but it seems that they shoot out, when he flicks his wrist (this is a reference to the method Spider-Man uses to shoot webs from his hands).

Mr. White wears a black suit with a white dress shirt underneath, along with a black tie. He also wears black sunglasses matching the stereotypical government agent. He is African American and has short black hair and a defined jaw. He can sometimes be seen wearing an earpiece, further symbolizing his occupation as a government agent.

Mr. White is Mr. Black's best friend and partner. Even through thick and thin, they always try to make up with each other, and always remain close friends.

Like his friend, Mr. Black, he buff and tough federal agent. Mr. White and Mr. Black work for the SSGA (Super Secret Government Agency). But their big secret is that they realize that Johnny and Dukey, along with the girls, are far more capable of crushing any evil that foists itself on Porkbelly than they are. A quid-pro-quo friendship underlies all the madness, and the six actually have fun together.

Although neither of them are very good at their jobs Mr. White is often shown to be the less bumbling and more up tight of the two. A good example of this is in their debut episode Johnny X. Here his partner accidentally reveals their mutant powers, and he immediately goes crazy and tries to cover it up, while Mr. Black just says "Oops" and stands there. This also is shown by the fact that he's a much more graceful dancer, and is usually the first of them to state their mission or announce a problem. Also when he and he partner are trying to tight rope walk he wants there to be a net for safety.

It's mentioned several time that he enjoys eating junk food. He likes to drink lemonade when its a hot day and he likes to dance, and is very good at it. He and Mr. Black are also shown to like cooking (like the General).

Mr. White with Mr. Black Dancing in the hotel

Mr. White as a Chicken

Mr. White as Susan Test
Add a photo to this gallery
Retrieved from "https://johnnytest.fandom.com/wiki/Mr._White?oldid=41327"
Community content is available under CC-BY-SA unless otherwise noted.