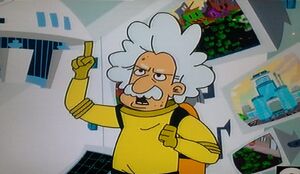 Mr. Phobious McPhobe is a minor character in "Johnny Test".

When he was younger, he had curly brown hair with a lab coat and as a janitor he wore an apron. Currently, he wears a yellow Hazard suit and an orange airtank. His hair is now white with a mustache of the same color.

McPhobe is a famous Hygienist and a scientist who loves to get rid of germs at anytime (he even made bathroom cleaning foams) and wishes to make world a cleaner place. Hugh once (when he was a kid in a camp) got a badge from him for being a clean and careful scout (Hugh explained that after that no body has ever saw him) but it appeared that he quit his job when he sneezed once while he was cleaning the bathroom when he was younger.(McPhobe said that his cleanness got under doubt and he decided to never get back to his work again) after that he built a foam making laboratory , becoming an alone scientist.

He first refused to help Johnny and Dukey about getting rid of the germs (telling that he doesn't do this anymore) but finally decided to help them by making an ingredient that can kill the germs but after Johnny accidentally poured down an "attracting ingredient" , it made the germs attack the lab, forcing McPhobe, Johnny and Dukey to escape from the lab and McPhobe destroy the lab with all of the Germs in in.

After that, with Hugh's suggestion, he lived with the Test family until his lab was rebuilt.

Retrieved from "https://johnnytest.fandom.com/wiki/Phobious_McPhobe?oldid=38554"
Community content is available under CC-BY-SA unless otherwise noted.