Sissy is a girl who is the rival of Johnny (who is slightly younger than her). She claims to be smarter than him but seems to be the victim of radiation in the episodes that she appears. Sissy may actually like Johnny and has fun bullying him.

Sissy has waist-length long blonde hair held back in a ponytail with bangs straight up and a red lightning bolt shaped streak covered by a red plaid bandana. She has multiple ear piercings, a fair skin color and big blue eyes with extremely long black eyelashes, a black choker and pink lipstick. Her normal attire consists of a black t-shirt with a blue camisole under with a red plaid skirt over jeans with two crisscrossed white belts and black and white checkerboard print sneakers. Her eyebrows are very thin and maybe drawn on. She also has two black bracelets on each wrists.

She has worn a ladybird scout uniform consisting of a green skirt, a green polo shirt with a pink bolo tie, a green beret dress with a pink upside down triangle with an acorn in the center. She also sports a badge sash across that has a large amount of badges on it.

In Johnny Dodgeball, Sissy, being a pro dodge ball player, has a standard uniform consisting of a yellow shirt and shorts with red outlines along with gray sneakers.

When Johnny and Dukey get shrunk down to more than microscopic size and are sent to a alternate universe, the Sissy there appears the same but has red hair and the lightning bolt is blond.

Sissy has a crush on Johnny in the series, and Johnny sort of kind of likes her too. Her feelings often hinted within almost all her appearances (ex. Saturday Night's Alright for Johnny, and Johnny's 100th Episode). Sissy tends to hide her crush for him very well through bullying him and asserting superiority over him.

The Good, the Bad & the Johnny, after Johnny gives flowers to her, she kisses him, and in Johnny Irresistible, it shows that Sissy likes him because she says, "I wanna kiss him, and kiss him, and kiss him!" She also appears to like him in Johnny B.C because Sissy "in love" is a sign Susan and Dukey use to find Johnny after Johnny (who was still mentality a caveman) licks Sissy. Sissy showed her feelings for him when she dated his clone in iJohnny.

Missy is Sissy's pet pink labradoodle and constant companion. Dukey is seen to like her too.

Hugh seems to like Sissy since in "Saturday Night's Alright for Johnny", he made Johnny give her what she wants because she bribed him by (fake) crying. He also said it in Join the Johnny Scouts when Sissy stopped by the Test house door.

Although Sissy never relies with Johnny's sisters, they interacted in Johnny and the Ice Pigs when she found out Johnny cheated, as well as in Who's Johnny? (when they were in the lab telling her about Johnny's behavior), and in Johnny's Supreme Theme because she was with the Test siblings, Dukey, Bling-Bling Boy and Gil). Johnny probably mentioned Sissy in front of his sisters in "Saturday Night's Alright for Johnny" when he told them he needed a device (The Saturday Repeater Machine) to rewind the events since Sissy ruined his Saturday, Johnny's Ultimate Treehouse (when he said to the girls he wanted to build a treehouse to show Sissy his treehouse is better), and The Sands of Johnny (when he asked the girls to help him because Sissy stole his sandcastle, and they agreed because they claimed it wasn't nice to steal from others). This might show that the girls could side with Johnny to help him when he is in a problem with Sissy, but not all the times.

Somewhat interacted with Johnny's mom in Johnny's New BFF when she was brought in the house, as well as being disguised as Susan, telling Lila there was a problem in the lab.

They only interacted in Johnny Zombie Tea Party when they both agreed that there should be founding mothers. (Although unknown, it’s very possible that if either Janet found out about Sissy’s feelings for Johnny, or she would be jealous).

Sissy kissing Johnny in "The Good, the Bad & the Johnny".

"Thanks Test You're Good."

Sissy in "Join the Johnny Scouts".

Sissy and Johnny in love

Sissy with her pet dog Missy 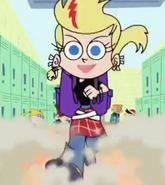 Sissy running in the halls 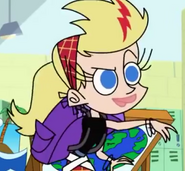 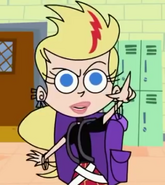 when sisy was at johnny's house