Sleepover at Johnny's is the first part of 61st episode and the 121st episode over all.

In a parody of The Cat in the Hat, Johnny invites Eugene, Jillian, & Gil to a sleepover.

Johnny comes home from school and goes to his room, dropping his backpack. His dad tells him to pick it up and he responds with running to his room and locking himself in it. Then, his sisters call him and he goes to the lab and he sees that they are dressed in pajamas. He asked why they were in pajamas and they responded by screaming "SLEEPOVER!". Susan and Mary wanted Johnny to invite Gil to their sleepover and in exchange they would build him a machine that would pick everything up, have cup holders, and be able to be ridden on.

So, with that in mind, Johnny went to Gil's house and asked him if he wanted to attend the sleepover but he responded with "No" because he would only go if there were onions. Johnny said there would be and right away Gil said "Yes".

Right after leaving his house Eugene sees Johnny and yells at him for not inviting him to the sleepover. But, the only thing Johnny could look at was Eugene's new blue "wild hair." Eugene said he had wanted to go so he could sneak a kiss to Susan. Johnny responded with a no at first, then Eugene bribed Johnny with a briefcase full of money and then Johnny's let Eugene come but he said he had to bring two bags of onions so Gil would go. Oddly, right when Johnny turns around, Jillian, Dark Vegan's daughter, said she would go too. Johnny said "No" because boys couldn't ask girls to sleepovers, saying it was "complicated." Jillian went past Johnny and told him that since he wouldn't let her, she would ask his sisters. Then, Dark Vegan appeared out of nowhere and said "Are you trying to make moves with my Jillian?" Johnny didn't know what he meant by this and just responded by leaving while Dark Vegan yelled "I WILL GET YOU JOHNNY TESSSSSSSSSSSSST!".

Then, Johnny comes back to the lab right when Jillian asks if she could sleep over and Susan and Mary accepted as long as she stays away from Gil, then they showed Johnny the machine. Johnny said it didn't look good because it wasn't colorful, and Susan and Mary said they didn't have enough money for that. Johnny then gave them the briefcase of money he had gotten from Eugene. And everything was set.

On that night, everyone was coming over. Johnny's dad was the one answered the door and he was surprised to see Gil there and asked him why he was here. Gil said that he was here for the sleepover and ran up the stairs to Johnny's room. Eugene came and ran up the stairs following the rest. when Hugh saw Jillian he disagreed on her stay at first but when the Test twins told him that she's going to stay with them and reminded him of their free scholarship, he accepted but if there was one thing in their house dropped broken or destroyed, he is holding Johnny accountable then Johnny asks how was that fair, and his dad said that it isn't where he then says that he's going upstairs and he wants no mess no trouble and boys and girls separated all night long. Susan and Mary took Jillian to the lab where they were almost done painting the "Stuff Picker Upper" red.

In Johnny's room, Gil was eating onions and Eugene kept bugging Johnny at when he could sneak a kiss to Susan. Johnny then played music and closed the lights so Gil and Eugene would go to sleep. Then Bling 2 came out of nowhere and it woke up Gil and Eugene then Bling 2 said that he does not want to stay at his house then Eugene rip his pajamas and Bling 2 rip his pajamas, Then they started fighting. Johnny's Dad came knock on the door and he said what was all those noise Johnny said that there were rocking out and playing video games then Johnny got out some headphones and Johnny's dad put them on so he couldn't hear and left as Bling 1 and Bling 2 broke the wall while still fighting.

In the lab, Jillian said if Mary and Susan if they want to check it out but Mary said that we have to be away from the boys but Jillian just left.

Susan went to get Jillian back to the lab then Jillian said that Johnny's sleepover is way better then theirs. Dukey got slam by the wall and broke it by trying to stop it right after that, Gil saw Jillian, saying that he thinks she looks cute, Susan with her laser sword told Jillian To stay away from Gil. starting a chase after her.

Then Johnny grab Jillian by her shirt and started running and slide down the stair and into the closet. Then Dark Vegan open the door and yelled "STAY AWAY FROM MY JILLIAN!" Johnny said This not how it looks like. Dark Vegan cut open the door and the wall with his laser sword. Eugene's mom came by smashing her car by the wall and ran over Dark Vegan and said why is he not at the house. Eugene said that he is a big boy now but his grab him by the ear and she said that he is coming home now. Gil bump into her when he was looking for Jillian, caucusing Eugene's mom get angry and whacking Gil's head with her cane. then she started to break everything as she was missing her glasses.

Then Susan ran to Jillian but Johnny knock Susan down and ran away with Jillian to the lab and said to Jillian that she has to go but Jillian said that she is staying so Johnny said that to flip a coin but Jillian said that she does not have a coin now Johnny is saying that they will spin a glass bottle. Then Dark Vegan came out of nowhere. Johnny said It's not what it looks like. Dark Vegan started to chase Johnny again but he lost him.

Johnny ran downstairs as there was a big mess in the living room, a talking fish appears and scolds him. Just then, Jillian accidentally bumps into Johnny and kisses him. Once again, Dark Vegan sees this again, and tries catching Johnny again. Once the machine has FINALLY been finished, Johnny hopped on it and attempted to clean the house. First, they take Bling's mom and Bling 2 outside, then throw Dark Vegan in a capsule, and finally, clean up the rest of the house. When Hugh is about to come downstairs, Johnny and Mary got rid of Bling 2, Dark Vegan and Eugene's mom and knocked out the others using "Sleep Mode", which is just sleeping gas. Once Hugh sees that they are having a big sleepover on the living room, he is proud that Johnny kept the house clean, so he leaves with a glass of milk and tells his kids goodnight. Just then, Susan appears and prepares to kiss Gil, but is knocked out (along with Mary) due to Gil's horrible onion breath. The episode ends with Johnny exclaiming "Maybe I saw this in a book!".

Susan threatening Jillian to stay away from Gil.

Johnny's plan for the night

Dukey has been (painfully) thrown into a wall. 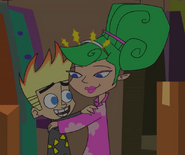 Johnny and Jillian hiding, hoping they won't get caught...

Gil is suddenly attracted to the "green-haired girl".

Caught by Dark Vegan after spinning a beaker.

Susan and Mary upon smelling Gil's nasty onion breath.
Add a photo to this gallery
Retrieved from "https://johnnytest.fandom.com/wiki/Sleepover_at_Johnny%27s?oldid=40825"
Community content is available under CC-BY-SA unless otherwise noted.