Susannah Laura "Susan" Test is the twin sister of Mary Test and is the youngest of the two twins. She is one of the two tritagonists of the series and the older sister of the titular character Johnny Test.

Susan is a super genius scientist and the younger twin sister of Mary (both being around 13 or 14) as she is tomboyish and firm as her brother Johnny, but like her sister, Susan cherishes a deep love and obsession for Gil.

Bling-Bling Boy (a.k.a Eugene) has a huge crush on Susan, but whenever he gets her to fall in love with him, it always fails, mainly because Johnny foils him or Susan turns him down, as she finds him repulsive. Like her sister, she attends school at the Porkbelly Institute of Technology. Susan is prone to believing in the more scientific and logical explanations for things rather than the illogical and magical explanations. Her sister is more open-minded, and Mary is frequently proven correct. Susan seems to be less level-headed than her twin Mary and tends to be less conservative, as she speaks her mind much more often.

She (like her sister Mary) is head over heels for Gil. She does things with Mary from watching him from a satellite in their lab and trying to hang out with him. Despite living next door to the girls for most of his life, Gil often forgets them, much to their dismay.

Susan is Johnny's sister and generally assists Johnny and Dukey with their creative inventions. For some reason, she gets annoyed by Johnny and is more likely to explode at him whenever his antics get under her nerves, but she still loves Johnny as a brother.

Susan loves her father but despises his meatloaf and his constant punishments for doing experiments and studying them on Johnny.

Lila and Susan seem to have a good mother-daughter bonding.

For some reasons, Dukey truly annoys Susan, but he still has respect for her as she's one of his owners.

Bling Bling Boy has a crush on Susan for a long time. However, she does not share the same feelings of love.

However, in two episodes, Bling-Bling Boy shared a kiss with Susan, although the first was with a robot look-alike.

Susan has very long straight red hair, blue eyes, and wears square glasses. She wears a pastel blue shirt with a blue star on it, a black skirt and white socks with black Mary Jane shoes and a lab coat. She wears a star-shaped hair clip.

Susan driving a go-cart with Mary

Susan without her glasses 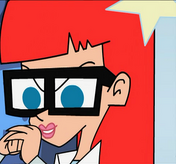 On a date with Gary and Sutton.

Susan without a shoe 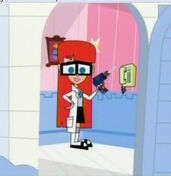 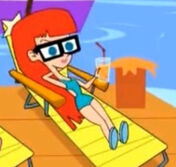 Susan enjoying herself on vacation

Susan dreams of being with Gil

Gil and Susan in a proposal 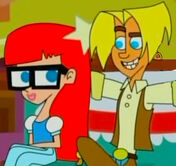 Susan at a tea party with Gil

Susan as a vampire 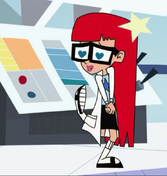 Susan about to press the button

Susan with Mary and Johnny 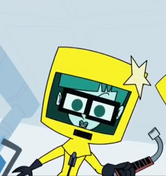 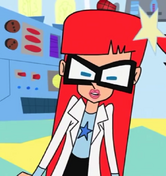 Gil and Susan in France 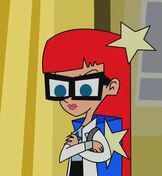 Susan in her hula Outfit in Johnny of the Deep

Susan in her Blue Dress in Johnny's First Annual Snowball

Susan Test with a Clipboard

Susan all bandaged up along with Mary

Susan as a Dog in Here Johnny, Here Boy

Susan as a Rabbit in Here Johnny, Here Boy

Susan as a Lioness in Here Johnny, Here Boy

Susan as a Hamster in Johnny's Petting Zoo Posse

Susan in her Wrestling Outfit in Stinkin' Johnny

Susan in her Beret without a Labcoat Magic Johnny 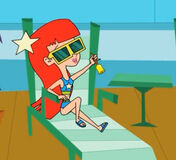 Susan and Mary getting their feet tickled by The Tickler

Susan's standard outfit without the shoes

Susan's redesign for the Netflix reboot.

"You cannot be my prodigy genius twin sister!" "Now hold still, this won't hurt a bit, it's gonna hurt a lot."