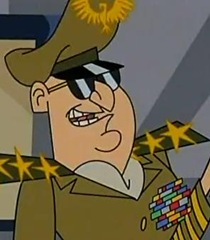 The General is Mr. White and Mr. Black's Boss and leader of the army base stationed within Porkbelly.

Loud and forgetful, he frequently takes action whenever the situation becomes too large for the Test sisters to maintain, although his efforts never fare any better. He also may take action without Agents Black and White when something threatens the safety of the city (like new weaponry going haywire, or unknowingly targeting Johnny and Dukey in a robotic lake monster used by a con artist to capitalize on an old legend, although he sometimes doesn't know he is antagonizing the Test kids). He is prone to overkill and rarely considers what result his actions may have on civilians, to the point he fired at a forest, an inhabited area, and even a place where many kids were playing in the aforementioned case. First Appeared In Johnny to the Center of the Earth.

The General as a Tortoise
Add a photo to this gallery
Retrieved from "https://johnnytest.fandom.com/wiki/The_General?oldid=41217"
Community content is available under CC-BY-SA unless otherwise noted.