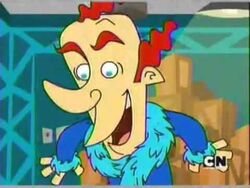 The Tickler (Voiced by Lee Tockar) is an enemy of Johnny and Dukey. He is the twin brother of Wacko (except he has red, not blue, hair) he had the ability to create any weapon that can make people laugh. He is jealous of his brother, even claiming he's the family favorite. In his only appearance to date he attempted to succeed where brother failed, getting revenge on Johnny.

Retrieved from "https://johnnytest.fandom.com/wiki/The_Tickler?oldid=43631"
Community content is available under CC-BY-SA unless otherwise noted.