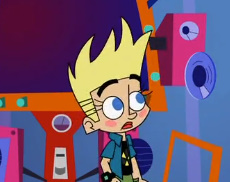 Princess Mara Bell is an Princess, Who only appeared In Princess Johnny.

Mara is a girl version of and looks and even talks like Johnny Test, She is a natural blond with the tips of his spiky bright red hair and has blue eyes Just Like Johnny. Her clothing consists of a black shirt with a hazard/radioactive symbol in the middle Are The Same as Johnny's, a federal blue short-sleeved dress shirt, green pants, and black shoes with a light gray trim. She wears a watch on his right wrist,

Retrieved from "https://johnnytest.fandom.com/wiki/Ticket_Guy?oldid=40762"
Community content is available under CC-BY-SA unless otherwise noted.