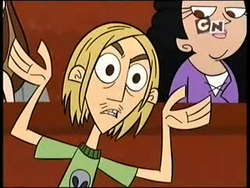 Timothy "Tim" Burnout is a classmate of Susan and Mary and the former owner of Mr. Mittens. He copied the modified genetic structure used by Susan and Mary to create Dukey and used it on Mr. Mittens, which turned him into an evil villain seeking world domination. Despite his lazy personality, he is apparently very intelligent, as he was able to alter Mr. Mittens (despite stealing the idea). His last name refers to the way he acts. A burnout is a psychological term for a syndrome characterized by long-term exhaustion and diminished interest, especially in one's career. In The Johnny Express his mustache is grown more.

Retrieved from "https://johnnytest.fandom.com/wiki/Tim_Burnout?oldid=42927"
Community content is available under CC-BY-SA unless otherwise noted.